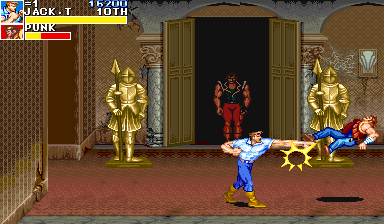 Cadillacs and Dinosaurs is a 2D side scrolling beat'em up, based on the Cadillacs and Dinosaurs animated series. The game has 4 playable characters: Jack Tenrec, Hannah Dundee, Mustapha Cairo and Mess O'Bradovich. Gameplay is similar to Capcom's other beat'em ups (for example Final Fight) — players go right, fight against enemies and bosses, collect bonuses and weapons (knives, UZIs etc). In one level, players get into the Cadillac, and can squash enemies.

the key configuration is the default one